When I first saw this recipe on a friend's blog, I had this "eew" feeling which was because of one ingredient which goes into its making. Milk! I could not imagine the taste of daal with milk and hence decided to give it a miss. However, on second thoughts considering the reputation that my friend has as a food blogger, I thought of giving it a try nevertheless. The result was as expected from most of her recipes. Awesome! So here's sharing with you the recipe of the daal with a "twist".

Direction
Boil the daal with salt, turmeric, and green chillies in a pressure cooker until done. Pour the cooked daal onto a heavy bottomed pan and let it simmer. In another pan, heat the ghee and splutter the cumin seeds. Now add the chopped garlic and whole red chillies. Fry for 2-3 minutes and just before putting off the flame, add the heeng. Immediately pour this tadka over the bubbling daal and cover for a minute or two to lock the aroma. Now add the milk and stir. Adding the milk adds a different taste and texture to the daal that you will love and won't regret. Bring the daal to one final boil and remove from heat. Garnish with coriander leaves and serve hot with rice/roti. 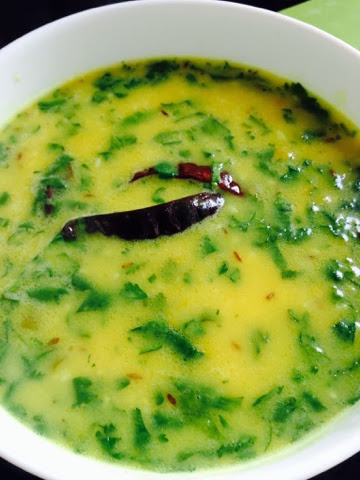 Priyanka
A homemaker, I am passionate about Food and Travel. While cooking provides me with a way to destress myself, Travel helps me refresh from the daily routine.

My Experiments with Food

Promote Your Page Too